Superman and Wonder Woman Have a Baby 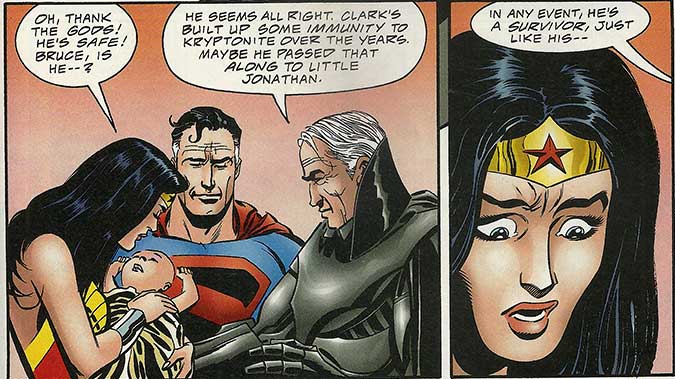 If you had read the classic story Kingdom Come illustrated by Alex Ross, then you may know that (spoiler alert) Wonder Woman announces her unborn child, courtesy of Superman. This was not the first nor last time we have heard of the Wonder Woman and Superman relationship, but is the first time we have seen the child in the loving arms of proud parents.

In The Kingdom issue 2 we see Batman, Wonder Woman and Superman travel from the future into the past so they could all battle Gog. Apparently Gog has been a busy boy, murdering Superman repeatedly from different time periods or dimensions or whatever. He also took the liberty of kidnapping Wonder Woman’s child, Jonathan, in the process and encasing him in Kryptonite. The story points out the mystery behind where the Kryptonite may have come from (because Superman supposedly destroyed it all) yet never explains the reason.

Most of The Kingdom part 2 is everyone punching Gog repeatedly. Who is Gog? Some big, powerful dude with a powerful staff. That is all you really need to know. There is really not much else to say without getting too elaborate, which would negate any reasoning for reading the story. But there are a couple cool panels of Wonder Woman holding her baby.

And let us be honest here. Just the thought of Wonder Woman and Superman in love and having a baby is super sweet. And I do not mean sweet as in sentimental, but sweet as in “the coolest thing ever to happen”. We know that Superman getting Lois preggers is bad news, so it makes sense for Superman to plant his seed in more suitable womb. And of course, that kid would be so awesome that he would not even need to be delivered. He would just shoot out of the birth canal soaring like an eagle.