Peter Parker and Mary Jane Kiss For the First Time

Peter Parker and Mary Jane have had a long relationship, and have even had a baby together. But if you were to go back to April 1975, we would land on Amazing Spider-Man 143. Even though our hero was still in mourning after the death of Gwen Stacy, that did not stop the inevitable kiss from Mary Jane as he left to go to Paris.

ASM 143 is a tragedy to read, because it is so good that it is almost depressing. Compared to the later issues decades later and direction the series headed, it is a miracle that it lasted as long as it did. The plot is that Parker is still having false visions of Gwen Stacy after Mysterio worked his magic on him during the previous issue. J Jonah Jameson is demanding Robbie Robertson to bring money to Paris, apparently as a ransom. He asks Parker to come with him. His friend Mary Jane accompanied him to the airport as he waited for his flight. Then we see Peter Parker and Mary Jane kiss for the first time, and it is quite a kiss indeed. 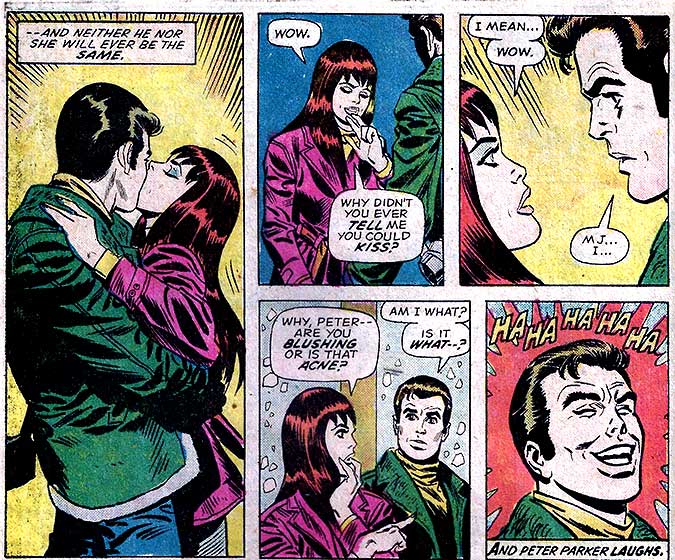 You may have also wondered why Mary Jane frequently called Peter Parker “Tiger”. This is explained on Page 11. When faced with this question, Mary Jane answers, “I call you Tiger ’cause you’re not!”. 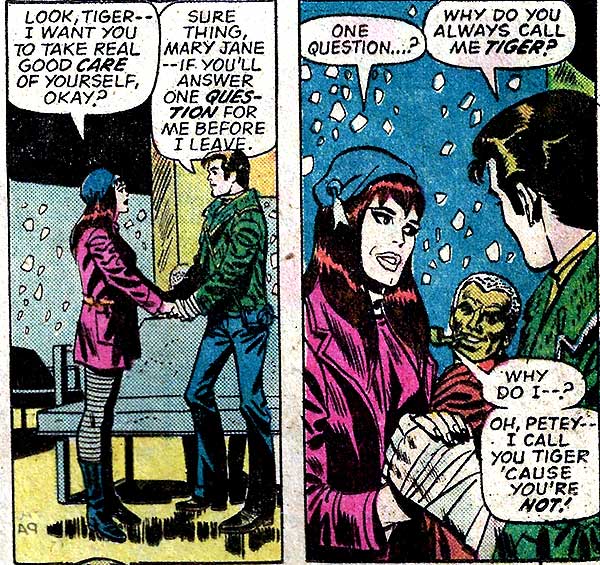 Another one of my favorite parts is where Peter flirts with Jameson’s secretary Bettie, someone Peter used to date, in order to gather information. What makes this particular panel so wonderful is the way the artist literally made her glow and blush. This method of figuratively expressing emotions is something that I miss in modern comic books.

In the end of ASM 143, Spider-Man battles an enemy called Cyclone. Spider-Man is thrown head-first into a building, while the enemy escapes. But to me, this battle was the least interesting aspect of this story. The artwork was done by Ross Andru, who is clearly underrated and under-appreciated with is stellar penciling skills. This is too bad, because his master craftsmanship was clear.

In the past, Stan Lee has said during interviews that it was always intended for Gwen Stacy to be Spider-Man’s one true love, but in the end it was destined for Peter Parker and Mary Jane to end up together.