…..No, that is not a typo. There is an Atari 2600 game called Skateboardin’ without the G. Why? Because the Atari 2600 existed during the 80s, and near the end of its lifespan, 80s culture began to be entwined with the games that were coming out. And one thing that was cool back in the 80s was skateboarding, and the only thing cooler was to spell words wrong intentionally.

Before the gazillion Tony Hawk video games, there was Skateboardin’. Skateboardin’ is a game like you would expect. You ride a skateboard and get to do tricks. Ride walls, go through pipes, do jumps, etc. The game is timed and you have to make it to school or something. There is a lot of scenery like bushes, roads, and so forth. But the most appealing aspect is this cute jingle that plays as you are riding the skateboard. Once you get off the skateboard, the character is holding the skateboard under his arm.

For those of you who have not lived through the 80s, just taking one look at the box art for this game will bring you up to speed. A person is riding a skateboard designed in neon colors, wearing shorts and sunglasses. If there were an award for “Most 80’s Box Art”, this would be it.

Skateboardin’ is a very charming game. Beside its obvious entertainment appeal, it is also one that makes you smile. It is not like other Atari 2600 games, with space ships and stuff. There is also a sequel called Super Skateboardin’ for the Atari 7800. So if you are into the Tony Hawk games or kick-flipping boards or doing a bunch of crap with a skateboard, get this

(affiliate link) game and check it out. I remembered this game from my childhood because it stuck out from the other games. Give it a try. 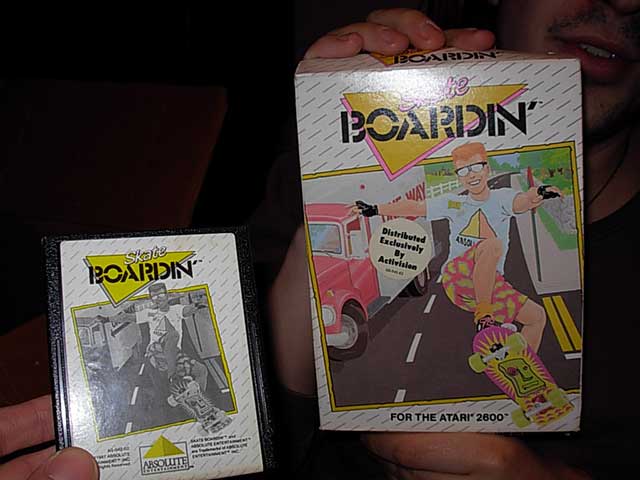