Ever watch the show MASH? I would ask if you had seen the movie, but nobody remembers, nor cares about it. The show, however was a big hit. Such a hit, in fact, that it made it prime for merchandising. Gotta milk that cow while you still can, I suppose. So what would be better idea than a military hospital game? Right?

While most war games involve shooting people, the MASH Atari 2600 game involves saving people’s lives. Basically you fly around a helicopter and bring people back to the hospital. Then you have to operate on them and take the bullet out. The operating aspect of the game is exactly like the kid’s game Operation. If you touch the side of the hole with the instrument, you lose.

If the concept of saving people with a helicopter sounds familiar, you may be thinking of the game Choplifter, which was awesome. (Not to be confused with the Atari 2600 version of Choplifter, which played differently and sucked.) The concept of taking the bullets out of people, rather than putting them in, is an unusual concept for a video game.

People are MASH crazy. The television show was insanely popular and it brought people together to watch other people blown apart. This is what makes the MASH Atari 2600 game a collectable. As long as it says MASH on it, it’s collectable. MASH t-shirts, MASH brand war rations , MASH abortion operating tools, etc. Lucky for you, you can buy the MASH Atari 2600 game for the price of one cent

. (affiliate link) Yes, that penny you passed by on the sidewalk was worth picking up after all. In fact, most Atari games you can buy for the price of postage (plus one cent). So stop being a cheap bastard and go buy some Atari games already! 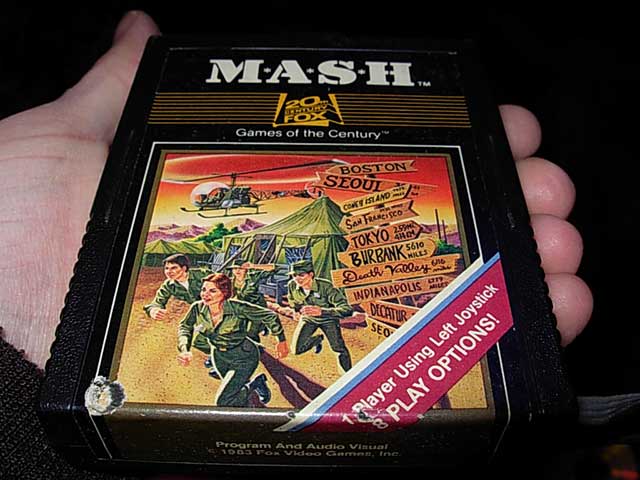 Fan of MASH? Tell me your thoughts below.