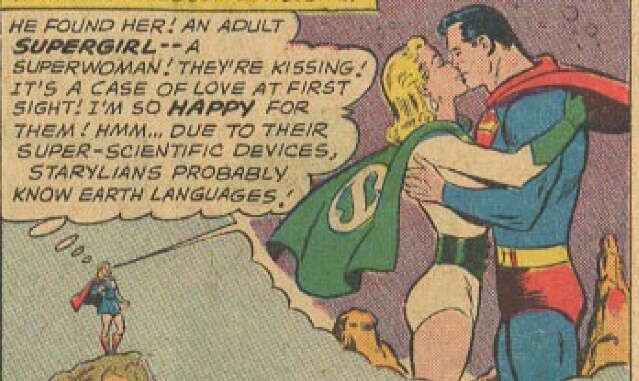 For those who know absolutely nothing about Superman and Supergirl, they are not a married couple. If you have been wondering how Superman is related to Supergirl, they are cousins. As the two only known survivors of their home planet Krypton, the question begs: were they ever kissing cousins?

I have discussed how Superman and Supergirl kissed in the past, but there is a story that takes it to a whole new level. It takes place in Action Comics 289. The bizarre Superman and Superman romance began with Supergirl’s idea that Superman should be married. You know women: always wanting to set people up. After a couple of botched attempts, such as tricking Superman into making out with a married woman, he confesses her intentions and suggests… herself!

So was there truly a Superman and Supergirl romance? Sort of. Supergirl finds a duplicate of herself on another planet. (If this makes you raise an eyebrow with confusion, I am with ya buddy.) Although they both instantly fall in love with each other, differences between their home planets cause them to separate.

For those interested in this issue of Action Comics 289, there are additional stories with equally bizarre and hilarious situations. For example, Superman, intentionally, laughs so hard that he collapses buildings. I am serious. Clark (Superman’s secret identity) also explains to Lois that the reason why he was not killed by a wretch to the back of his skull was because he was secretly wearing a helmet that was conveniently shaped like his hair at the time.

The idea of a Superman and Supergirl romance, in love, or even just doing eachother, is creepy as hell. Beside this, Supergirl has the body of a teenager. But if the last known living man or woman of your own species was your cousin, would you entertain the idea? Leave your thoughts and comments.