Ever hear of of Phalanx? Apparently it is some evil robotic dude that can assimilate humans and was trying to assimilate mutants. I discovered all of this in Uncanny X-Men 316, which was published in the comic book glory period of 1994. (That was sarcasm.)

The story is called The Phalanx Covenant: Generation Next Part 1. The simplest way I can explain is that the Banshee discovers that the X-Men have been assimilated by Phalanx while Professor Xavier is elsewhere. Cyclops and his new bride are on their honeymoon, so they escaped unscathed. Banshee needed to let loose Sabretooth and Emma Frost to help control the madness.

Uncanny X-Men 316 was illustrated by Joe Madureira, who I can only describe clearly by saying that he has a style of his own. I say this because I think his figures look weird and strangely out of proportion. Yet he continues to elicit a fan base which I do not understand. The one thing I can say though is that his style is unique, and drawing too realistically can it hard for an artist to stand out.

Another interesting thing about this issue is that on page 22, it contains an infamous image taken (swiped) by Roger Cruz. Cruz was accused of repeatedly copying artwork from Joe Madureira. Personally I would have borrowed my artwork from a different artist, but to each their own I guess. 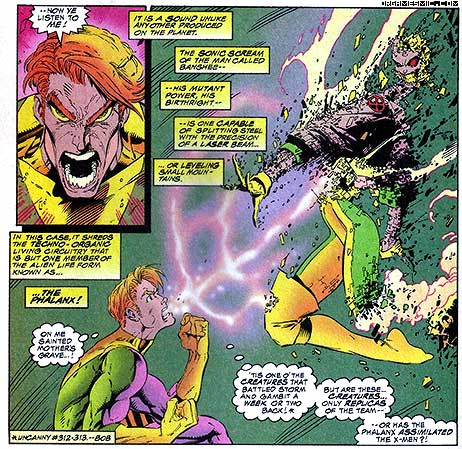 There was apparently a lot of interest in this story line. For one, the second X-Men Sega Genesis game seems to be based on this plot. Also, the plot was retold in the X-Men Animated Series on Fox. If you are a fan of the series, you do not have a choice but to check the story out for yourself. There is a pretty sweet hardcover graphic novel version out there, if you are into that sort of thing.