Comic Book Swipes: Enough To Piss You Off

Copied. Borrowed. Inspired. Swiped. Homage. There are many words and excuses, but they all mean the same thing. We are talking about the practice of closely imitating another picture or drawing and then using it in a comic book, as if it were an entirely unique piece of art. Comic book swipes, many call it. When we are children we learn by imitating. Some grow out of it while others depend on it, some more than others.

Some take reference too far. You see, nearly all artists use what is called reference, the practice of looking at something to help you draw what you want. For example, if you did not know what the Sistine Chapel looked like from memory, you would find a photograph of it before trying to draw it from scratch. If you were to draw a person wearing a suit, you would perhaps look at a suit in your closet to make sure it looks right on paper. Makes sense, right?

Unfortunately people overstep this boundary. Why copy the suit when you can copy the person inside it as well? Why have a model pose for you when you can trace a photo that you found off the internet? Imitating a drawing by redrawing it is virtually the same as tracing, although many refuse to see it that way. Likewise, some think that if they draw from a photograph, the work they put into it makes it solely their own creation and it cannot be copyright infringement.

The appeal of comic book swipes may be too much to resist if you were a young artist hired early in life to illustrate your first comic. You have a deadline to meet, and your talent is not up to par. What do you do? Struggle to make something that will just be inferior anyway? Or just copy from an artist that has indisputable talent? With the millions of comics and photos in the world, who is going to notice if you copy one pose or picture? Seems like a reasonable risk.

But this is the internet age, and when everyone on the planet is intertwined in a virtual web, you are bound to get caught by someone. This is especially true if you consider that most artists using Google Images as a reference source. When unimaginative artists Google “suit of armor” and copy the first picture that appears, it is awfully easy for someone to stumble upon the same image and recognize it. 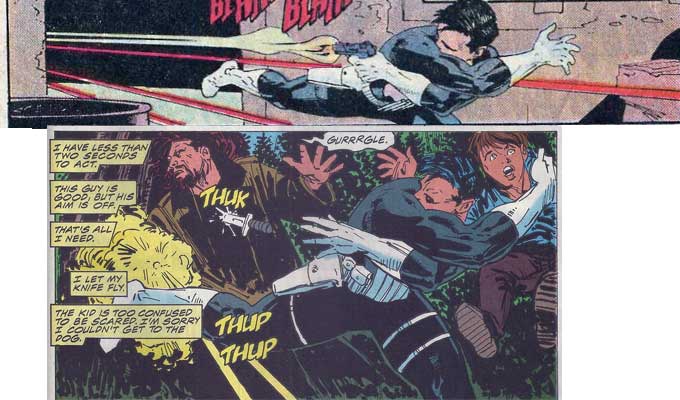 What makes scenarios like this bad is that the panel often comes out strange looking or awkward due to second-hand work being used in a different context. In one example, a copied panel was altered to have a kid palmed by the Punisher while he throws a knife into someone’s chest. Another panel has been imitated to have the anti-hero throw not one but two knives at once in a peculiar V-shape.

Example 2: Daniel Cooney VS John Byrne (And Others)

Perhaps the worst offender is Daniel Cooney, not just for copying drawings from artists, but by flaunting them in his how-to-draw book as well. His book Figure Drawing for Comics and Graphic Novels

not only has an alarmingly large amount of borrowed material but demonstrates throughout the book how to copy photographs as close as possible. His brilliant observations on drawing from memory seem astounding until you discover that a ginormous chunk of it came from the Famous Artists School‘s old textbooks. What drives it all home though is the page that shows figure proportions, the front and side drawings of people that are the hallmark indication of an artist’s talent, are lifted from John Byrne’s How to Draw Comics Comic.

The problem with this practice is that it is encouraging further generations to do the same. There is not much reason to create comic book swipes. Sometimes copying photographs exactly is totally acceptable. There are only so many ways to draw the Eiffel Tower. But to rob someone of their own unique spin on things by creating a drawing of a drawing is super shady. Those are my two cents anyway.

What are your thoughts on comic book swipes? Leave a comment below of your favorite offenders.