One of my favorite story arches takes place in Spectacular Spider-Man. Basically, the Chameleon captures Spider-Man and takes off his mask. He pumps Peter full of drugs and tries to make him think that he was never actually Spider-Man, but rather a basket case.

Eventually Peter remembers the truth, but it is too late. He is captured in an electrified cage, one too powerful for even him to escape from. And what does Chameleon do while he is in there? He tries to rape Mary Jane, his wife. It all takes place in Spectacular Spider-Man 245.

Surprisingly, Mary Jane quickly discovers that Chameleon is masquerading as Peter when he arrives in her home. She plays along as they go upstairs, then beats the crap out of him with a baseball bat. And where is good old reliable Spider-Man during all of this? He pads his hands with webbing so he can tear apart the electrified cage he was in. 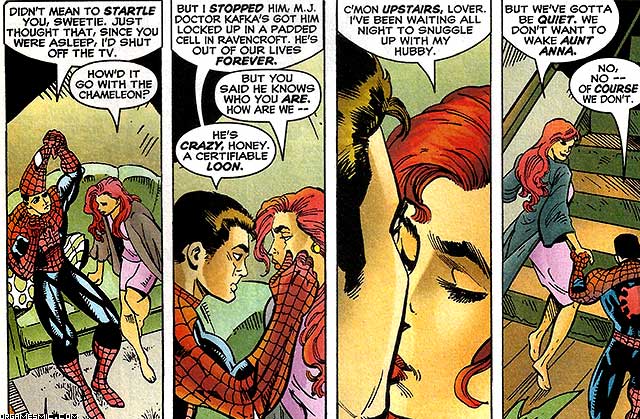 This was not the only injustice he planned to perform on Mary Jane. He chemically aborted her baby by poisoning her coffee. This was a damn shame. I am sure the readers were looking forward to seeing the child of Spider-Man being born.

The artwork was drawn by Luke Ross, which I believe is highly underrated. His draws of people have always appeared dynamic and have a distinguishable style. His shapes of skulls in particular are strong and clear. I remember buying Spectacular Spider-Man 245 off the rack in 1997. This was a great pleasure than cannot be done often anymore. I would go to a nearby rest stop and just sit in the dining area, reading comics and magazines. When I was done I would play arcade games and get a drink out of the vending machine. I did this for years. It is the small things in life that makes thing great, would you not agree? Leave a comment.