Comic fans have often heard of the classic story Batman: Hush. There are even some comical parts, like when Robin stuffs his face with a hamburger and fries. What made the graphic novel so intriguing was the combination of Jeph Loeb’s writing and Jim Lee’s artwork. Loeb has been hit or miss with his odd and sporadic writing style, but when we see the art of Jim Lee and Huntress combined, it makes the time spent to read Hush definitely worth it.

If you have Batman Hush (or if not you should buy it) you should immediately go to chapter 10 to see Jim Lee and Huntress at their best. She is under the spell of Scarecrow when we see her and ends up fighting Catwoman. I have to admit, this story works in an amazing amount of Batman characters. We see Huntress in her belly-button costume and get a nice shot of her abs. 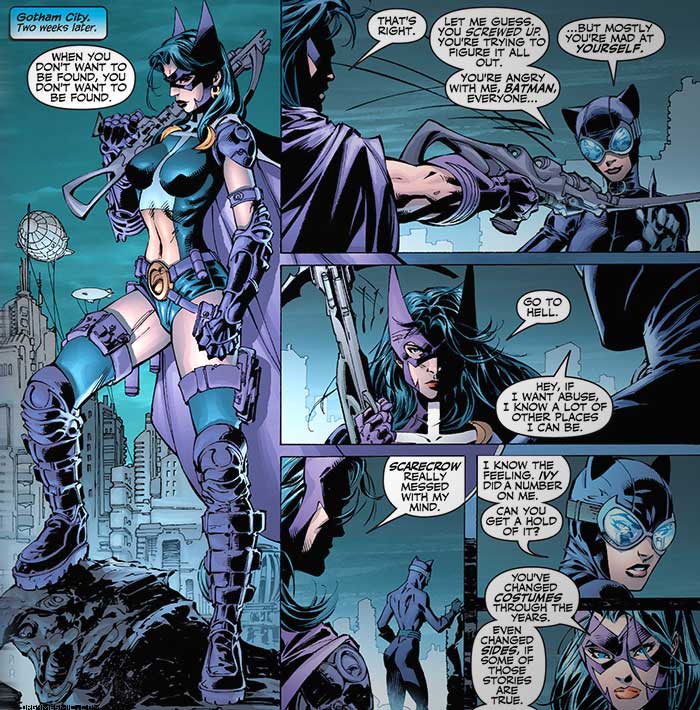 But an even better shot is seen in chapter 12, which is the last chapter. If all you care about is this chapter, go and get Batman 619. In this comic we get a clear images of Jim Lee’s Huntress from a side view. She is standing on a gargoyle in the same way we have seen Batman and Superman in similar poses. This makes it easy to compare Huntress to the way she is conveyed by other artists.

An example would be Ed Benes, who illustrated Birds of Prey. He does a fabulous job of making all of his characters sexy, as is typical of his work. What is great about Hush is that it shows the work of Lee from relatively early in his career. This helps you track his progress, and are able to see contrast between the many images of men and women he depicts.