It is hard to believe that it took me this long to talk about the original Deus Ex game, subtitled “The Conspiracy” on the ps2 version. It is by far among the best PC video games I have ever played, and believe me, I have played a lot.

The original Deus Ex game plays out like a fun interactive movie that feels like it will never end. Despite being made in the year 2000, which would obviously show its age by today’s standards, the story, gameplay flexibility, and overall length of the game (which fit on a single CD-ROM disk!) makes it easily one of the best games ever created.

Imagine a first-person shooter where you can talk to people explore the area in detail. That is the idea behind the Deus Ex game. You have the option to collect the weapons and items of your choosing and using them to approach a scenario any way you find fit. Go through vents, climb ladders, stack boxes, jump over fences, and a million other ways that let you take advantage of an environment to get the job done.

The sort of flexibility that the original Deus Ex game offered has become expected in many video games that we enjoy today, but back then the type of branching that let you go through the front door, sneak in the back window or surprise enemies from the roof entrance made it feel as if it were real life and you were actually there. It was the kind of cleverness that had me playing the game non-stop through my high school months. The levels were so vast and generous that I thought the exploration would never end.

The AI, probably stupid and silly by today’s standards, were pretty good in the Deus Ex game. If you stood in their way, the would walk around you. If you tossed a box at them, they would ask you to stop. I would regularly stack potted plants and whatever else I could find to block character’s paths just to see how they would react.

Let us not forget about the amazing sound track. Especially compared to the ho-hum music of the later games, the original Deus Ex game sound track was phenomenal and unforgettable. It was always appropriate and was even dynamic, setting the mood whenever someone was about to attack you, or if you were calmly talking to someone in a safe environment.

Just to surprise you from time to the time, the game would throw you a curve-ball in many way. There is an Easter Egg where if you throw a basketball through the hoop while exploring a park, the game praises you and says that you should join the Knicks or something. I remember discovering this and being shocked that the game predicted my curiosity.

Admittedly, I did not care about PC games when the original Deus Ex game hit the market. Heck, I never even heard of it. Then one day, I decided to buy a surround-sound speaker system for my home PC so I could watch movies. And what did the speakers come with? A few amazing PC games, such as this one.

Not being a big computer game person at the time, I was confused and surprised about certain things in the game. The opening to the original Deus Ex game, after the cinematic, just shows the title rotating indefinitely. Eventually I figured out that I had to press the escape key to being playing.

A lack-luster sequel was released on the XBOX, which destroyed the franchise for a while. Years later, Deus EX: Human Revolution was released with similar elements, such as flexible options and.. prostitutes. Yes, the games need prostitutes. Not sure why. 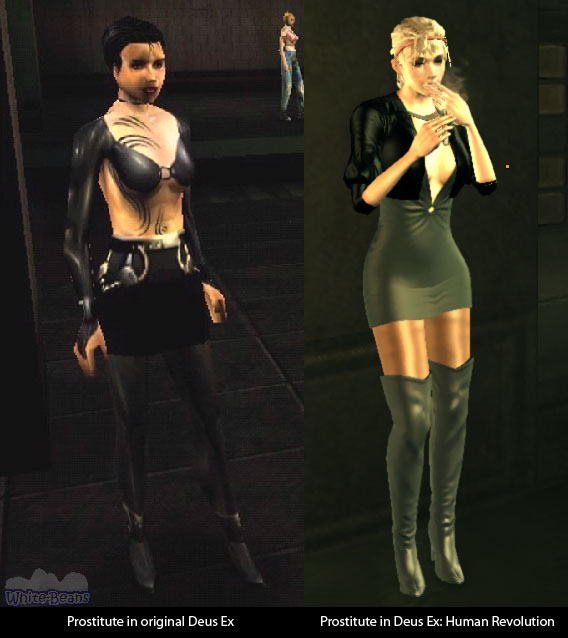 Are you a fan of the original Deus-Ex game? Of course you are. I would constantly re-install it until my CD stopped working. Leave a comment about your memories, or buy the game

(affiliate link) if you are crazy enough to have never played it.