I have always been a fan of vintage Atari 2600 games. The one I would like to focus on is an arcade port called Commando. A top-down shooter classic, the Commando Atari 2600 version is one to be remembered for its faithfulness to game play. Let’s face it: the Atari 2600 is not known for its capability to emulate graphically intense games. However, Commando is a game worth sampling.

If you have played Commando before in the arcade, you know how great of a game it is. As a top-down shooter, the game play is challenging enough to take away your roll of quarters. Commando wound up being ported to many consoles and computer systems, such as the Nintendo. Ironically though, it wasn’t a huge improvement over the Commando Atari 2600 version of the same game.

Now don’t get me wrong, the Atari 2600 version of Commando has its limitations. For one, the sound track is severely shortened, which often happens with similar games on the console. And of course the graphics suffer. One of the worse offenders is trying to shoot and throw grenades with only one available button. But that’s the Atari for ya.

If you are looking to improve your collection of Atari 2600 games, Commando is an excellent choice. The game is seemingly endless, which gives it tons of replay value. In addition, there are also checkpoints and boss battles. A good place to find retro games is eStarland, which has a huge array of selection. If this game sounds interesting to you, I suggest you give it a try. 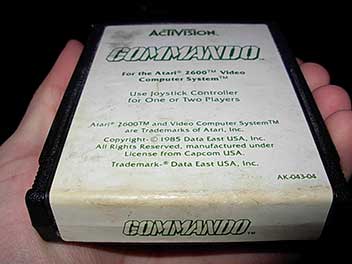