Would copying and pasting an image of a real life national disaster into a comic book background be offensive? It is debatable for sure, and I do not have any strong argument for saying so. But when I read Stormwatch issue 14 from DC Comics, I thought it was appalling and incredibly insensitive on many levels. Visible in the background while two people were fighting were the iconic remains from the September 11 attacks of the Twin Towers in New York City.

Something that has bothered me for quite a while is the enormous amount of copying and pasting of panels in comic books in this digital age of comics. I mean sure, artists would use a photocopier from time to time before Photoshop (remember the pearl necklace breaking in the Dark Knight Returns? One of the panels was literally copied and pasted) but with much artwork now being done on the computer, it takes cutting-corners to a whole new level.

Sometimes in comic book backgrounds, artists will combine a photograph along with a filter to make it seem as if it were drawn, when in fact it was just lazily pulled off the internet, almost certainly violating the copyright from whoever took the picture. In Stormwatch issue 14 (New 52) Will Conrad, one of the two artists, seems to have taken a popular image of the fallen Twin Towers and blatantly slapped it into one of his backgrounds. 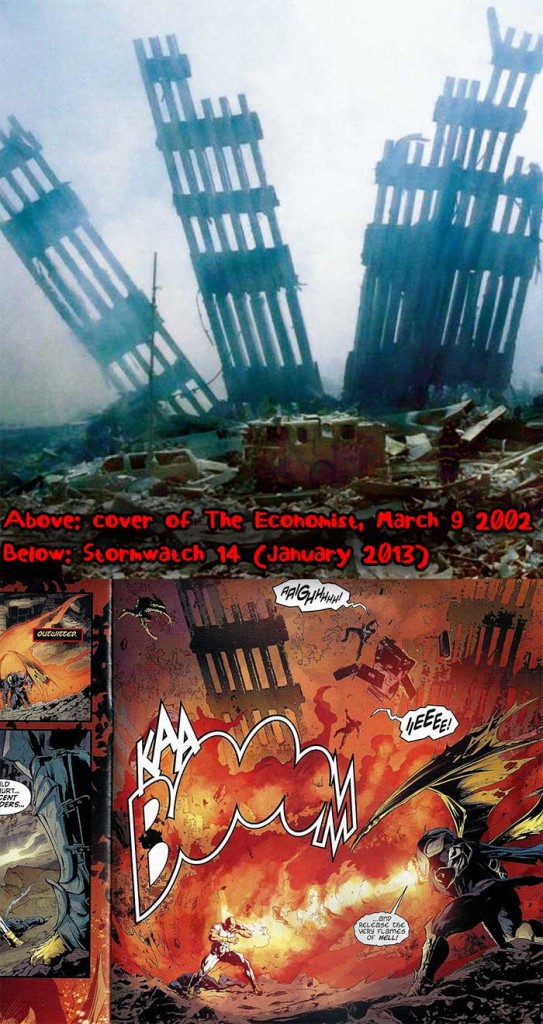 In my opinion, it is bad enough to take a photograph and try to pass it off as your own artwork without even having the decency to redraw it or use it for inspiration. But to take an iconic photograph that represents the near three thousand people who died on September 11th 2001 and to use it in a scene where two super-people are fighting feels like a big middle finger to all people involved.

Or maybe I am completely wrong. Maybe so much time as past that it does not come off as insensitive at all. Leave a comment and tell me what you think.