Shang-Chi’s Powers: Does He Even Have Any?

Since the 70s, Shang-Chi has been seen as the master of kung fu. Not exactly a super-hero, right? Having no powers is a good quality to have in concept, but in practice it doesn’t really pan out. Proof of this happened in 1968 when they decided to ditch Wonder Woman’s powers. The backlash forced the writers to reverse the decision.

With this in mind, Shang-Chi’s powers began to develop over time. When he first appeared in 1973, no powers existed since he was already the master of kung fu. But as usual, Marvel had to get greedy and mess everything up. Similar to how Superman was in the early days, it seems as if more abilities would magically manifest for Shang-Chi over time. Some great examples of this are in Avengers World issue 3.

Apparently Shang-Chi’s powers include the ability to clap out torch frames from a distance, plainly pick up and throw fire with his bare hands, and channel abilities from the dead. I don’t know what kung-fu school Shang-Chi attended, but it must have been one hell of a deal.

Since the term kung-fu (which literally translates to “practice”) is ambiguous by nature, I suppose Shang-Chi’s powers are… anything. Or he has “the power of kung-fu”, if you want to think of it like that. Sorry for the vague explanation.

His first appearance was in Special Marvel Edition issue 15, which continued into issue 16. What is hilarious is that there is an actual advertisement for karate in that comic book. Admittedly, I would be hard-pressed not to send 99 cents through the mail to learn karate after reading an amazing martial arts story. 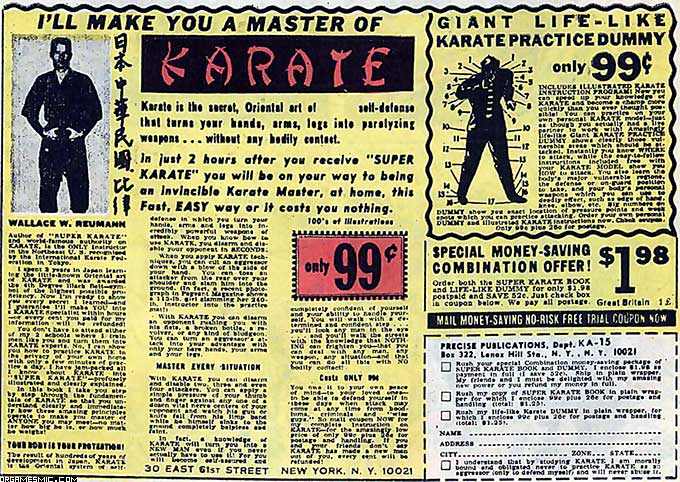 To be clear, karate originated from Japan and kung-fu came from China. But you could argue that karate came from the influence of kung-fu. Whatever.

Are you aware of any other strange or bizarre Shang-chi powers? Leave a comment and let me know. I love things in comic books that make no sense. Even though the stories are fantasy, there is something to be said about special abilities that are never defined.