Red Sonja has grown to become a cult hit, with a series that continues to this day (currently published by Dynamite, at the time of this writing) . Originally though, she first appeared in Kull and the Barbarians issue 3, which contained the Red Sonja origin. Published in 1975, the issue contained many stories, one happening to tell the tale of Red Sonja.

The Red Sonja origin is titled She-Devil With A Sword. In the forest, she finds robbers torturing a man. She kills the robbers and upon inspection of the tortured man, she recognizes him. The man was a leader of a pack of mercenaries. The mercenaries had killed her family, and the leader raped her. Following the traumatic event, a superior being appears and grants her strength which made her able to wield a sword in battle. She then vowed to find the man who had ravaged her. But when she finds the man five years later, tortured and out of his mind, she leaves the man to the fate of wolves.

What is interesting is that the same identical story had been published more than once, except the pages were completely redrawn, closely resembling the originals. The story was republished in The Savage Sword of Conan 78 by Marvel in 1982. This time, the illustrations were more clear and sharp, easier to understand. Even so, it makes me wonder why. Some sort of copyright issue would be my first guess. Below is a comparison of both Red Sonja Origins, done by different artists. 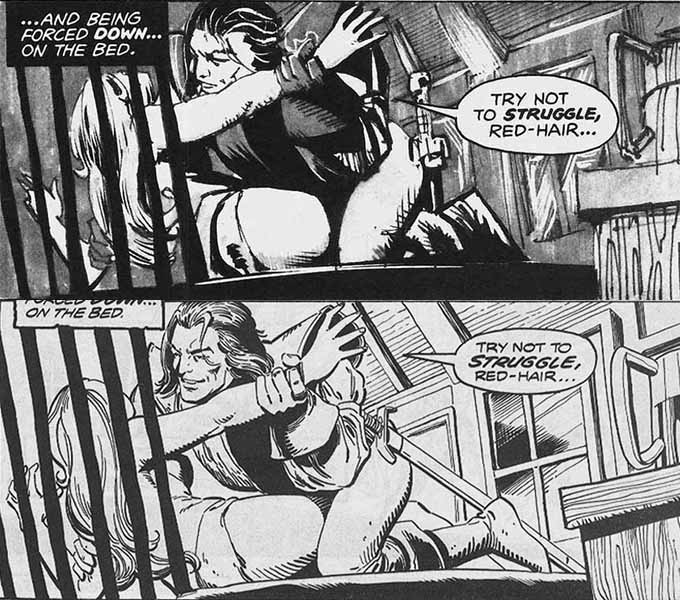 The Red Sonja comics have a strong fan following, and for good reason. Dynamite was wise to pick up the series, which publishes similar protagonists such as Vampirella. If you are interested in the older and original stories, you may want to pick up The Adventures of Red Sonja, Vol. 1

. (affiliate link) If not, you may want to pick up the omnibus by Dynamite, which contains the newer stories (the publishing quality is better, as well).

Fan of Red Sonja? Leave me a comment and tell me why below.