The comic book Rachel Rising (not Rachael Rising) is a horror comic series by Terry Moore. What is intriguing about Rachel Rising is that, the genre being horror, it is not something that Terry Moore has anything like before.

The story begins with a woman named Rachel, who was strangled and buried in a shallow grave. Her eyes are red from burst blood vessels, and her skin cold due to a slow heartbeat. Somehow, this is tied to a mysterious woman, a spirit, who appears whenever someone is about to die.

Oh, and Rachel can predict a person’s death as well.

Rachel Rising is violent and edgy, as a horror comic story should be. The majority of the main characters are women, which is typical of Terry Moore. Women are Moore’s specialty. The men are illustrated fine, but not always great. There is also a young girl that plays a key part in the story, but there is always something awkward about the way she looks. O assume it is the challenge of drawing children. Overall though, the drawings in Rachel Rising are excellent, ans there is some amazing use of texture as well in most panels.

The story pacing in Rachel Rising sometimes feels wasteful. There is sometimes very little to look at in a panel, leading to the reader finishing the page quickly. This is a shame, because Moore apparently spent a ridiculous amount of time making every scene beautiful. Whenever there is a closeup of a woman’s face, the precision in the illustration is so accurate, it is eerie.

Terry Moore is also not afraid to confront rape in his comic book stories. In Rachel Rising, the previously mentioned little girl almost ended up living with a child molester. During another scene, an accident victim finds someone to drive her home, only to find that person with his hand up her skirt. And in yet another, someone reveals that a girl was gang-raped in the woods for being “the pretty one”.

As much as I would like to reveal details of the twists and secrets of the storyline, I would rather you discover them first hand. If I could, I would insist you read them. The story is conveniently broken up into volumes, published as individual graphic novels. At the time of this writing, you can buy them here at a cheaper price than Amazon. 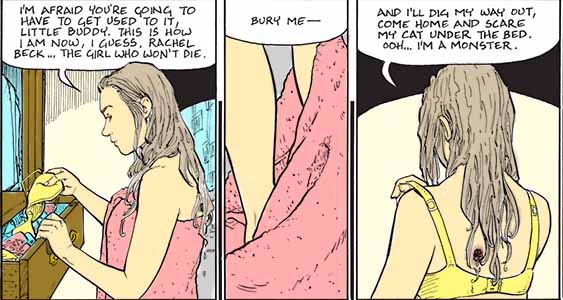 Remember, it’s Rachel Rising, not Rachael Rising. What do you think of this comic series? Comment below.