My goal was to order about $25 worth of grab bag comics books as a test. The three I chose were MyComicShop.com, TFAW.com and MidtownComics.com.

When ordering from an online comic shop, I expect a good experience. I am happy to report that this was the case for all three comic shops I had ordered from. As said before, I was aimed at comparing how well online comic shops would handle an order of about $25 worth of grab bag comic books. In all three cases, ordering was a smooth process.

On the front page of their site is a button for comic value packs. You can choose from several themes such as Manga, Super Hero, et cetera, and receive “18-22 comics sorted by theme or genre”. I had decided to choose two packs: Image and Vertigo. The price for both would be $17.89 plus $5.00 shipping.

TFAW.com is Things From Another World in Oregon. They are where Dark Horse Comics originated. Due to curiosity, I needed to test this online comic shop as well.

Things From Another World provides grab bags individually only. To me, this was a disappointment. I am the kind of person that loves a bulk discount. Comic grab bags are $0.50 at TFAW. I assume the idea is that if someone wants to round off their order, they may order a grab bag comic. Kind of smart, actually.

The category choices were Dark Horse (of course), Marvel, DC, or Independent. I chose seven of each, except for DC which I chose eight. The cost was $17.50, plus $10.08 shipping.

The third online comic shop I had to try out was MidtownComics.com . Midtown Comics have several locations in New York City, and are gaining popularity and steam. I have been curious about them for a while so I thought I would give them a try.

Midtown Comics has several grab bags for $10 or $20. If you select the independent comics category for $20, they send you 80 comics. How could I say no? $20.00 plus 5.49 shipping made my order go a little bit over my $25 limit, however I felt it was worth the risk considering the volume of comics.

Another popular online comic shop is Mile High Comics. I could not find a grab bag option on their website, which was the sole reason not for using them in this comparison.

Another site I considered was CardsOne.com, because they sell comic books by the pound. I estimated that one pound equals about seven comics (although comics are getting thinner these days) . Ten pounds of comics at $8.99 would mean 50 to 70 comics. The shipping though would have been $15.44.

For those of you who just read what I wrote as “blah blah blah”, this table should clear things up a little:

All three shipments were packed adequately with paper, packing peanuts, or sheets of air bubbles. As far as I could tell, there was no interior damage due to shipping or the way things were packed. In all three cases, most of the comics were not bagged or boarded, although a select few were.

The entire shipment process took about a week, from ordering to receiving. The books from this online comic shop were put in plastic bags and then taped to card board. The card board made good use as dividers for when I later put the comics into boxes. The rest of the box was padded with brown paper.

Books were sent from the online comic shop TFAW in a shallow box, with the books wrapped tightly in plastic bags. The bags were made tight with fun stickers that said TFAW.com on them. There was a flyer included that offered discounted shipping. It took a little over a week for the package to be received. The box was padded with packing peanuts and paper. 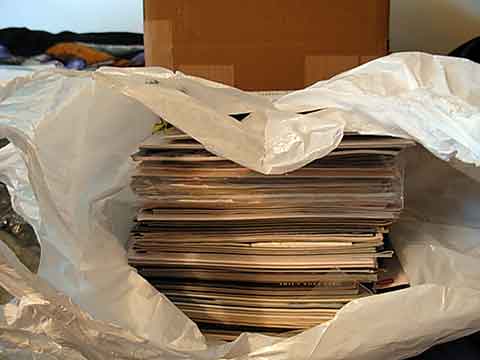 Midtown comics is in close proximity to where I live, so the package was received super fast. Even with this in mind, I was still impressed with the fast processing. The order was received in a tall box weighing 12 pounds. The comics were wrapped in two bags that said Midtown Comics on them. They were the kind of bags you would get after making a purchase in a store. From the look of it, it didn’t seem like it would have been adequate packing, but there was no damage so I guess it was fine. The rest of the box was padded with bubble sheets. There was also a flyer included with discount codes for my next purchase.

Some the online comic shops provided recent comics more than others. By recent, I mean a comic published within three years of the date I am writing this. This is ironic. I expected a large number of the comic books to be from the 90s, but most were from after the turn of the century.

The two packs I ordered were for Vertigo and Image comics. The website says, at the time of this writing, 18-22 comics. What I ended up getting was 17 Vertigo and 17 Image comics. If it happened in only one pack, I would say that someone miscounted. But knowing that it happened twice means it was probably done on purpose. I am guessing this is because the comics are sold by weight, hence saying 18-22, and not a solid number. Even so, I can’t help but to feel that I was cheated a little.

The Image pack was good as well; however, 7 out of 17 were Spawn comics. Needless to say, this could be interpreted as either good or bad. None of them were in sequence. Personally, my face lit up when I saw the Spawn comics, because it was a popular series I never had a chance to explore. Overall, I was satisfied with the selection. Look at the table below and judge for yourself.

Things From Another World sells their grab bags individually, at $0.50 each at the time of this writing. I had decided to order a mix of genres, trying to reach as close to $25 as I could, shipping costs included. The result was me ordering 7 Dark Horse, 7 Marvel, 7 independent and 8 DC.

Most of the comics were from a couple years ago. Many of the DC were that “New 52” crap, when they rebooted all their comics. Marvel was in a similar boat, mostly being recent comics from a couple years ago. The independent comics were broad, but not obscure publishers. The Dark Horse comics I have never heard of, but isn’t that the idea of a grab bag? To learn about new ones?

The gem of the group was a recent Dynamic Forces variant of Green Hornet 3. Not that I care about Green Hornet, but knowing that they threw in a collectable was kind of cool of them. It was the only comic bagged and boarded. There was also a Star Wars, Terminator, and a couple Batman comics. There were no duplicates.

I had ordered 80 independent comics. Independent comics, in this case, meant anything but Marvel or DC. The selection of comics chosen by this online comic show was vast, with both hit and misses. 32 out of 80 were recent comics published within the last three years. In fact, many of them were published less than a year ago. For someone who does not have a comic shop anywhere near them, it was a real treat to see what was going on in comics. Because so many comics were from the year before, I assume Midtown Comics simply takes everything that was left over or that they couldn’t push in the past few months and puts them in these grab bags.

Let me acknowledge the amout of duplicates. There was only one true case of the exact same comic being selected. However, there were several duplicates in terms of variant covers. Almost none of the comics were worth anything at all (how could they be, if they were just from last year? ).

The surprise gem that stuck out was a Dead World 2 incentive variant. There were several Vampirella comics, which was great also. There were also a few comics with trading cards included. I was excited to get such a broad selection of comics. I was expecting a lot of crap from publishers I never heard of, but I was pleasantly surprised with enough reading material that will keep me busy for a long time.

Alright, this article has gotten way to long already. To summarize, there are many places to order comics, and ordering grab bags is a fun experience. MyComicShop.com tends to provide less recent back issues in their grab bags, while Things From Another World allows you to sample more recent comics individually. Midtown Comics provides fast shipping and the biggest stack of random comics $20 could buy. Your selection of online comic shops is vast, and so are your options.

Hopefully this wall of text wasn’t too bad on your eyes, dear friend. Have you had good or bad experiences with any of these online comic shops? Comment below.