Most people who read comics at one point or another dream of making their own comic books at some point. That is why Marvel created the Official Marvel Comics Try-Out Book in 1983. Around 10 years later, they would release a more updated version.

The purpose of the Marvel Comics Try-Out Book was to attract new talent to the company, originally in the form of a contest whereas the winner would have their work published. The version from 1983 had a unfinished story written by Jim Shooter and penciled by John Romita, so it was a treat just to own this over-sized book.

The book is large, as the included pages that were to be worked on happened to be the same size as those used professionally in the industry, to imitate working conditions as close as possible. Even the original blue colored pencil sketches are there for you to ink over (blue being because photocopiers did not respond to that specific color). 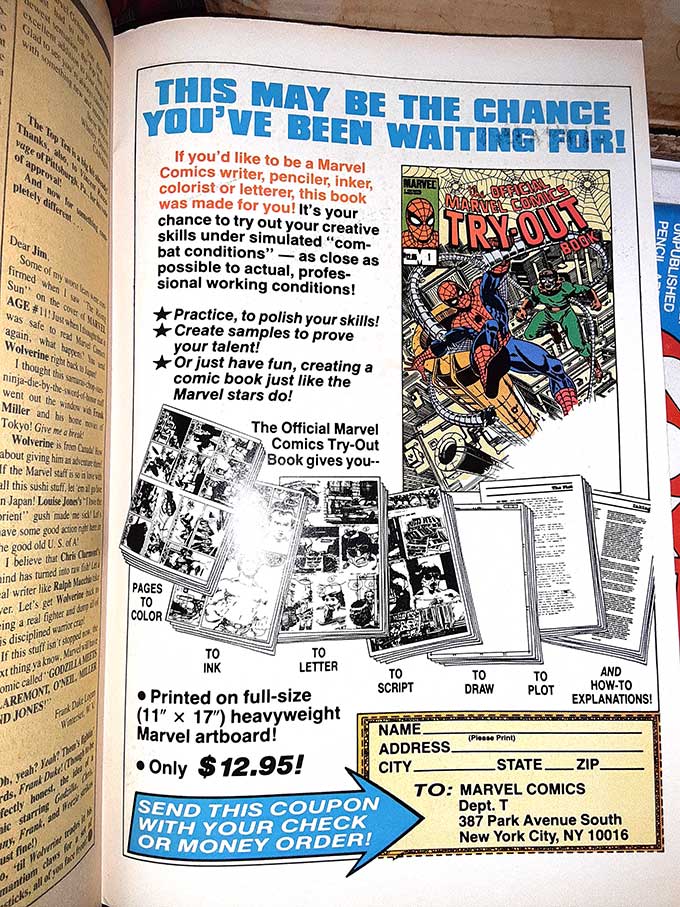 As second Official Marvel Comics Try-Out Book was released in 1996, over 10 years later. It briefly discussed more modern technology, and lacked the blue pencil drawings of its younger brother. Although its pages did not seem as realistic as in the first book, the second book is still fun to play and dream with. It also contains a better coloring chart that explains how to paint the pages.

For any aspiring comic book artist, the Official Marvel Comics Try-Out Book is the way to go. There is no better source to find out exactly what the big-shots expect before you submit your work. Even if you could care less about drawing for comics, the books are super fun and interesting to read.

If you are looking for these the books, There are several places you can check. Mycomicshop.com carries them, but may not be in stock. Amazon (affiliate link) sometimes has them available for widely varying prices. I have seen them for sale to at Mile High Comics. As a last resort, you could check Ebay as well.

Do you have these books? Any thoughts?