If you read Spider-Man comics, you may know about Mysterio, the man that can cause illusions. Well recently I was going through Marvel Super Heroes Magazine

, (affiliate link) which I guess is Disney’s way of getting young kids hooked on comic books. What I saw inside was nothing short of hilarious.

Insider were several pictures of Mysterio wearing a suit. Now remember, Mysterio’s “head” is simple a sphere. So how does he wear a suit? Even while seeing it square in the face with unadulterated eyes, I still don’t know the answer. It is just a pictures of a suit with a ball sticking out of it. It seems like a thing that would be in a parody or something.

Mysterio is wearing a suit because he, and the Sinister Six, were going to pretend to be celebrities using Mysterio’s illusion abilities. And here I wonder, why can’t Mysterio give the illusion of them wearing suits as well? Doesn’t matter I suppose. The pictures of Mysterio wearing a suit would make a great internet maim. The more I look at it, the more I can’t believe it. Like when I found out how much money a douche-bag can make singing on youtube. Nothing short of unbelievable. 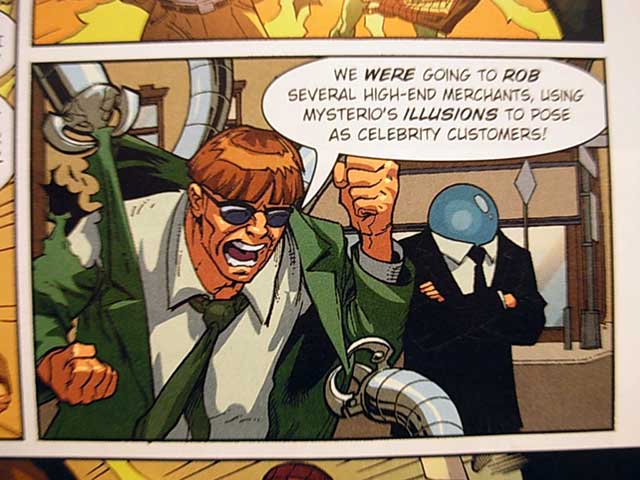 Do you find the picture as strange as I do? Comment below.