Calvin and Hobbes Comic: Best Strip of All Time? 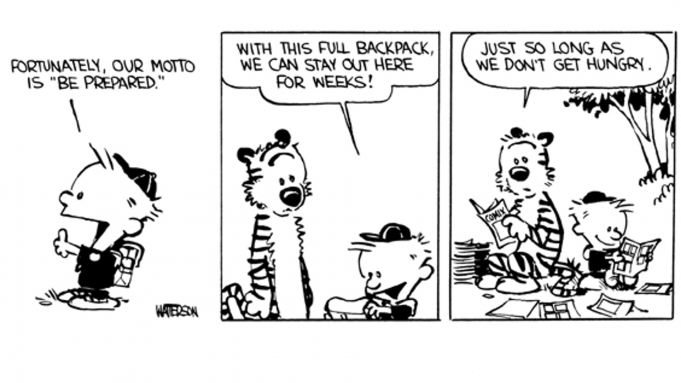 When I was a kid, my collection of Calvin and Hobbes comic strip books were complete. I do not mean that they sat proudly on my shelf; rather, they were hidden under my bed, the front covers destroyed due to constant use, primed to be read underneath my sheets with a flashlight again and again.

Known for its memorable quotes, cleverness and ingenuity, the Calvin and Hobbes comic strip series continues to be among the high ranks. It is still sought after to this day from both childen and adults alike. Alongside with The Far Side (in my opinion) the strip by Bill Watterson was one of the few comic strips of its time that had continuous themes that went far being ingenious situations and laugh-out-loud ideas. When I was very young, I used to read the Garfield comic strip

(affiliate link) religiously… until I realized how empty it was. To a small child, the strip was easy to understand. As the years went by, I began noticing what would seem like laziness with the jokes. I would recognize a strip and say, “Was not that joke used already?”. And then I would go through my Garfield books and literally find the same joke told previously.

The Calvin and Hobbes comic never had this issue. It was smart. Perhaps too smart. As revealed in the tenth anniversary book

, (affiliate link) people would write the author and would complain about the complex verbalism. Bill Watterson also discusses in his anniversary book how he toyed with how the readers would react to certain plot elements, and how he fought to avoid commercialism, another differing aspect compared to how Jim Davis approached the Garfield comic strip.

The problem with the lack of Calvin and Hobbes comic merchandise is that it left an empty feeling in peoples’ hearts. Bill Watterson’s readers had to turn to calendars, treasury book collections, and even bootleg t-shirts, which I remember were very popularly sold at flea-markets during the time. Calvin’s popular quotes were slapped on clothing alongside plagurized images on the comic’s most well-known character.

For those of you that never want to forget the Calvinball, the duplicator story or the hilarious snowmen, entire and complete

(affiliate link) Calvin and Hobbes comic strip collection is available in four volumes and a cool slipcase that has an image of the duo dancing on the side. It could simply be the most cool and irresistable book collection that exists on the face of the planet, bar none. So dig in, and as the last strip said: “Let’s go exploring”.