You may not have known this, but Daredevil and Black Widow have had a relationship, even living together. Much so in fact, that Daredevil issue 92 has the extended title Daredevil and the Black Widow. This is fitting because they have a lover’s quarrel that leads into this story. In the previous issue, she walked out on him and later finds herself in trouble rather quickly, as we discovered Black Widow captured and tortured.

I suppose tortured is a bit extreme, as she is mostly brainwashed into attacking Daredevil. Nevertheless, Natasha is captured and held down as a device attached to her head has the ability to probe minds. Meanwhile, Matt Murdock is worried about her and has to deal with a reporter revealing his secret identity. He does not even find her until issue 93 when she attacks him and tries to snap his neck.

Natasha was not captured alone, though. along side her lied Danny French, an acquaintance she dealt with on her first assignment as a spy. So as you can tell, much happens during this section of story arc.

Artist Gene Colan really knew how to make Black Widow hot and foxy, with curves in all the right places. A true master of anatomy for sure, as both Daredevil and Black Widow look absolutely amazing in these issues. In issue 90, there is a panel where she strips her clothes in a bathroom, revealing her outfit underneath before she exits through the window. Colan’s detail even accounts for Natasha’s reflection in the mirror behind her. 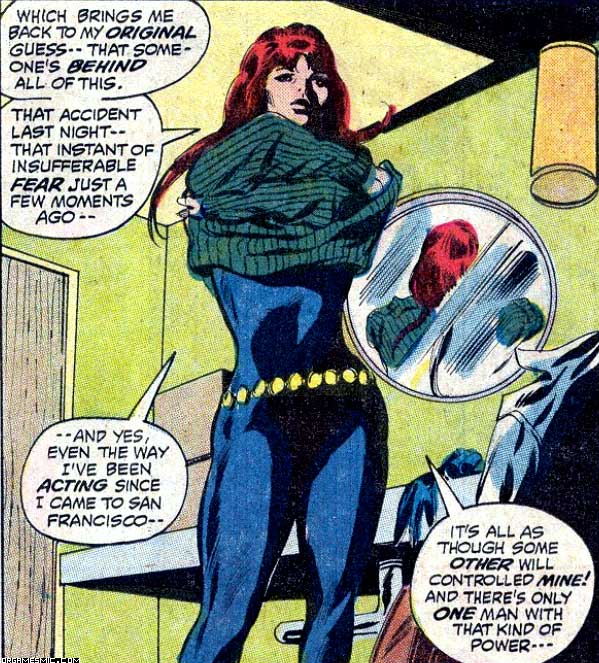 The easiest way to read this story arc of love between Daredevil and Black Widow is to buy the collected book called Marvel Masterworks: Daredevil Vol 9. With both top notch art and writing, it is worth every dime to see these Marvel heroes interacting together.