You may have heard of Russ Heath, who at time of this writing died not too long ago at the age of 91. He was known for his illustration work on Sgt Rock, Cowgirls at War and Little Annie Fanny. You also may have heard of Roy Lichtenstein, who followed the pop art trend along with other artists like Andy Warhol. His paintings of blown-up comic art include Drowning Girl, Hopeless, and Whaam.

Another one of Lichtenstein’s paintings included Blam, made in 1962. So what is the connection between the two artists? Russ Heath drew the image first in All-American Men At War 89. Lichtenstein then blew up one of Heath’s panels and made a large painting of it. You might wonder how Heath would react to an event like this happening. The answer? Not good. 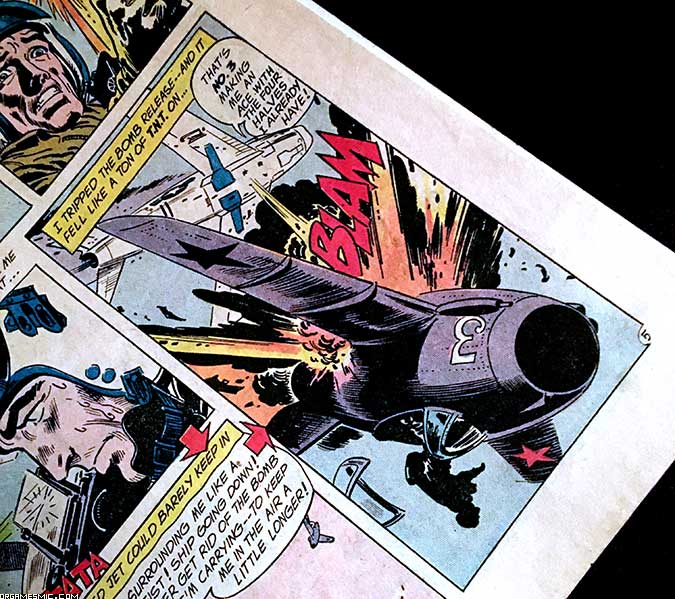 This was made clear in an issue of Hero Comics, a series used to raise money to help comic creators, writers and artists in need. Written and illustrated by Russ Heath himself, it is claimed that Roy Lichtenstein received four million dollars for his imitation of Heath’s work. Meanwhile, he received nothing but an invite to a museum’s reveal of the painting. The irony was that he could not make it to the event due to deadlines. Presumably, from that time all the way up to his death in 2018, he was struggling financially.

I feel like when this sort of thing happens, it takes imitation and swiping to a whole new level. A quick internet search reveals that no one may know for sure what amount the painting sold for. However if you assume that Russ Heath was correct and it sold for four million dollars, something feels deeply wrong. It seems like a gray area as far as morals go. It is horrible to think that your hard work was not only underappreciated (comic book illustrators had a bad reputation back in the day, according to a Stan Lee interview) but stolen and sold for millions. Keep in mind that the pay to illustrate comics was not great in 1962. So it is not hard to picture how Russ Heath must have felt when all of this happened.

What are your thoughts? Fair game? Plagiarism? Comment below if you dare.