No, that is not a typo. There was a Nightmares on Elm Street comic book series, with an S at the end of Nightmare. When I found three of these issues in a thrift shop, I was hoping that it was a misprinting, or some sort of rare, unauthorized production. Alas, I was wrong about both. It turned out that there were many A Nightmare On Elms Street comics that were spread out and published between films. The series I found, issues 2, 3 and 4, were apparently independent stories produced to promote the then up-coming film Freddy’s Dead: The final Nightmare that was published the same year (1991).

I was disappointed not to find issue 1 and was surprised to find out that the series went up to 6 issues. I was equally as surprised to discover that instead of being one continuous story, different issues encompass different plots. Issues one and two apparently have a completely different artist and even feature Nancy Thompson from the original movie. it is too bad that the Nancy from the Nightmares On Elm Street comic books looks nothing like the one we are used to seeing.

The comics already make an awkward leap with the change of artists, but to make things worse, the pages lack numbers and the only advertisements are for Freddy-related products such as trading cords and, you guessed it, the upcoming film. There is also an extremely awkward “special preview” section in the center of the comics that promote a different comic by showing some of its pages. The problem here is that there is no distinction between the regular pages and the preview pages. Like in issue 3 for example, the preview pages were drawn and colored by the same artist as the comic I was currently reading, and was for the movie adaptation of Freddy’s Dead. So I had no idea if I was actually looking at a preview, or if it was a continuation of the main comic’s story. 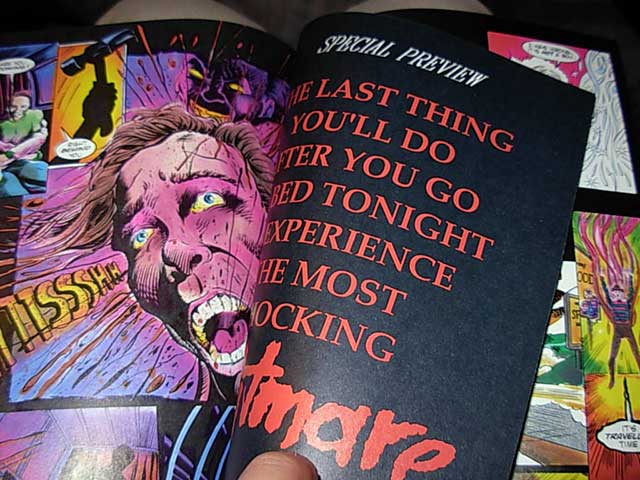 The stories were written by Andy Mangels (nothing to brag about) and the first two issues had painted panels by Tony Marris. Yes, painted! Issue 2 also has a cover by Miles Teves. I had never heard of this guy before but the front cover for this comic is unbelievable, and could have been a movie poster.

These Nightmares on Elm Street comic books have something good going on here. They seem to be highly collectible for any Freddy fan (and who is not one?) . The best place to find and buy vintage comics like these is here. Otherwise, there is always eBay. Be sure to check them out.