There is something unsettling about trying to picture someone like Batman smoking. Granted that he did do some crazy stuff, like slap Robin in the face. That being said, we are talking about a character who is always at his peak physical fitness. This is sort of ironic since we don’t often see him working out, yet we do see him sitting at his computer for long periods of time.

When Batman began appearing in Detective Comics starting from issue 27, it was 1939. Since the Comics Code Authority didn’t even exist yet until the 1950s, anything was fair game. Smoking pipes were popular at the time, and the typical image of Sherlock Holmes probably made it easy to picture any detective with a pipe in his mouth. So it should be no surprise when we see Batman smoking early on as Bruce Wayne. In fact, from the very first panel of Batman’s first appearance, we can see him enjoying a puff along side Commissioner Gordon.

You would think that by the time his side-kick Robin shows up, he might give up the pipe for a child’s sake. On the contrary, he continues to puff the smoke in his face while jesting about beating him. That’s the way of the Batman, I guess. 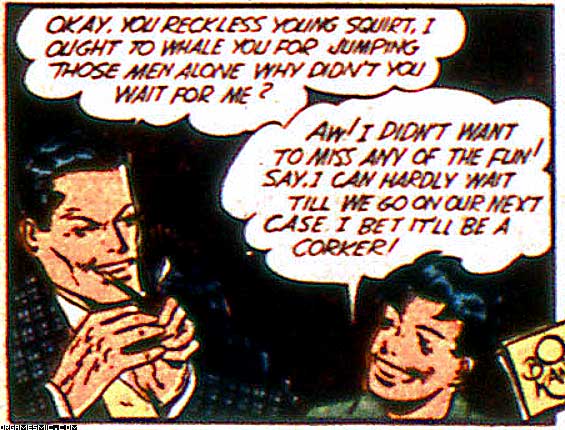 How about we go further into the future, all the way to 1973 in The Brave and the Bold 105. We can see that Bruce Wayne, aka Batman smoking still from a cigarette thing. So at least he dropped the outdated pipe for the cooler cigarette, or thin cigar or whatever.

So there you have it, the almighty Batman smoking up a storm without so much of a cough. If it’s okay for Batman, it’s okay for everyone else, it seems. I’m surprised DC Comics didn’t go all the way and allow Joe Camel to pitch that sweet tobacco within the comic book pages. I mean, he was a cartoon camel, and comics contain cartoons. This makes sense until I remember that Joe Camel didn’t appear until 1987. I guess Batman just needs to convince kids to smoke all by himself.

Alfred Beats Superman Into the Ground