I usually prefer to use original content and not to repeat posts from other sites or blogs but there are some unbelievable swipes from famous artwork that you have to see to believe. They will change your entire perspective from certain pieces that influenced others and changed the world.

Before we begin, what are swipes, you may ask? They are intentional imitations of artwork originally done by (typically) a more talented artist. Reasons and excuses vary, but cutting through the BS, it is hard to avoid the word “plagiarism”. Here are some examples for timeless pieces that I personally found shocking.

Oh no, Frank Frazetta, how could you? The man known for his unbound influence on movies like Conan The Barbarian, Star Wars and countless other things due to his hyper-realism style painting technique is the last person you would expect of doing this sort of thing. However, a visit to the Frank Frazetta museum revealed, by admission from his own son, that he waited until literally the day before a commission was due before he would create an entire oil painting and bake it in an oven. So how did he create such beautiful pieces of art so quickly?

By doing things like this, I guess. A blog pointed out that a french painting called Les Porteurs De Mauvaises Nouvelles (the bearers of bad news) resembles a Frank Frazetta Conan The Destroyer painting a little too closely. As this exists in both versions of his painting, I would say that it counts as one of many unbelievable swipes from famous artwork.

Clearly Bob Kane had virtually zero drawing ability to go to the lengths he had. Blogs such as here and here show this. He basically swiped from everyone he could: Henry Vallely, Alex Raymond, Harold Foster and Lord knows who else. When I discovered this, it was like witnessing my childhood idol drowning a baby. Considering these unbelievable swipes from famous artwork, Bob Kane was kind of a jerk. 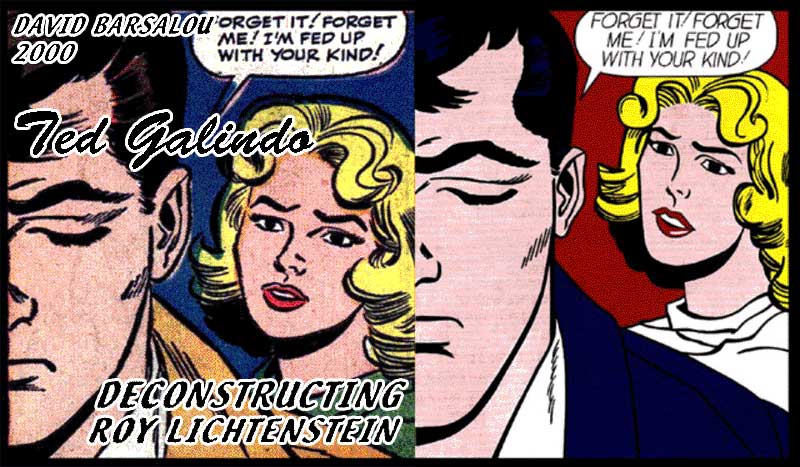 Do not know who this guy was? He was probably before your time. Basically he imitated panels from war and romance comics and recreated them on large canvases. His work was perceived as pop art at the time and thus was not always considered a true fine artist. This is fitting, since none of his work seems to be completely original. The Lichtenstein Project page shows comparisons side by side, which you can see that he did not come up with anything on his own. Some may disagree with me however the size and context of a single panel blown up and intended to be focused on in a singular sense does pass as art in my book, even if he did trace the work. Which he clearly did not, since if you look at Forget it! Forget me! (in the photo above) he seemed to have zero knowledge of facial construction and tried to eye-ball the original panel by hand. Needless to say, he would have been better off he just traced the damn thing. Also, many of his paintings have added tangents and color clashes that confuses the composition and shows that Lichtenstein lacked the knowledge of basic design fundamentals. This can be seen in The Kiss and others.

Regardless of how you feel about art swipes, they are sure fun to find. They are kind of like a game. Leave a comment with your own favorite swipes.

One thought on “Unbelievable Swipes From Famous Artwork”